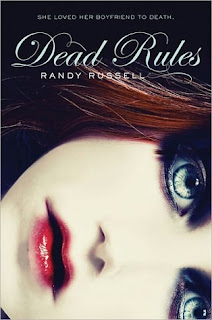 Jana Webster and Michael Haynes were in love. They were destined to be together forever.

But Jana's destiny was fatally flawed. And now she's in Dead School, where Mars Dreamcote lurks in the back of the classroom, with his beguiling blue eyes, mysterious smile, and irresistibly warm touch.

Michael and Jana were incomplete without each other. There was no room for Mars in Jana's life—or death—story. Jana was sure Michael would rush to her side soon.

But things aren't going according to Jana's plan. So Jana decides to do whatever it takes to make her dreams come true—no matter what rules she has to break.

I read this book a few months ago and the details are a bit fuzzy, but I really liked it and I still feel like recommending it. Besides, it is very appropriate for the season. It's one the most original, twisted, dark, haunting, hilarious, interesting book I have read in a while!

So... Meet Jana and Michael. They are a happy couple of high school students who are deeply in love with each other. They have all their future planned out and of course, they will live happily ever after together. Or so they thought. Because all their future plans fall apart when Jena dies and ends up in Dead School.
After the bewilderment of being dead and in a school for dead people wears of, Jana realizes that Michael is not there with her, which is so not fair, because their love story can’t end just like that, right? Would Romeo and Juliet’s love story be so epic if only Juliet died? Probably not, so our Jana decides that she will do anything to be with Michael again – even if she has to kill him.
Just like any other school, Dead School has rules, cliques and getting around them is not as easy at it seems. Here, the consequences of breaking rules can be much more dangerous, more… final. But that won’t stop Jena from trying to get to Michael so they can get their happily ever after.
Anyway, even in this strange place, she can find some friendly faces. Ok, maybe their faces are not always  literally friendly (most of the students have the same look they had when they died – you see a girl with a dart in her head here, a boy with broken limbs there, another girl with feathers coming out of her mouth somewhere else) but they can be very nice. Even Mars, who is supposed to be one of the bad guys. In fact, he doesn’t seem so bad to her, on the contrary, he is nice, charming, always there when she needs him and he even helps her with her plan to get to Michael. But spending so much time with him confuses her; she realizes that she likes his company more than she should. Which makes her question her own feelings, her relationship with Michael and the reasons why she wants to be with him. She couldn’t actually be wrong about her feelings for him, could she? They belong together, they always have. Right? Well, sometimes I had to roll my eyes at Jana's obsession with Michael, but everything turned out ok in the end. The whole story is twisted, creepy, tense, hilarious at times and keeps you guessing until the very last page.
And there are so many super funny moments in this book! Randy Russel has this twisted, dry, sometimes morbid humor that is so unique and quite addictive! The plot is interesting as well, of course, but without the amazing writing, I doubt the story would have the same appeal. You just have to read it and see for yourselves!
Speaking of which, I just had to share with you a couple of quotes. Maybe it's just my vivid, crazy imagination or the timing, but reading these scenes had me rolling on the floor laughing and gasping (not really, but almost)

Pauline was the center of attention. The senior danced with two boys at once, one in front of her, and one behind. She turned her top half to face one while her bottom half faced with the other. At one point, the boy dancing with Pauline’s top half took her hand and twirled her around from the waist up. Both boys had to duck in turn when her hair, permanently swept straight out to one side, came around.

She watched Wyatt at the Sliders’ end of the gym. He was taller than most of the other students in Dead School. No one had a name for the dance he did. He stood in place and rocked from side to side, using his good arm to roll imaginary toilet paper around his wrist.

Oh, and the cover! When this book first came out, I was like obsessed with it. Those eerie, hypnotic eyes... *stares**shudders* Yup, definitely a must read for the season!:))