I'm sorry I'm posting this so late, but last week was kind of crazy around here. There's still a lot of prizes to win and many of interesting guest post to read (plus a great book trailer!), so check out the Brightest Kind of Darkness Blog Tour. ;) 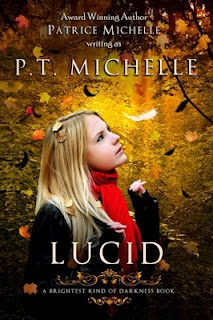 Once Nara combines her prophetic ability with Ethan’s power to outsmart Fate at his own deadly cat-and-mouse game, she’s more determined than ever to help Ethan learn the meaning behind the raven sword tattoo that suddenly appeared on his back after their confrontation with Fate.

During her quest to uncover the tattoo’s secrets, Nara enlists the help of some new friends and discovers her own surprising connection to Ethan.

While Nara digs deeper into the mystery, her desire for answers leads her down a dangerous path full of powerful and ruthless enemies. Swept into an age-old battle, Nara quickly learns that keeping one’s enemies close can be a necessary evil, making an intangible enemy she can control far more preferable to the human enemies she can’t.

Lucid is the amazing sequel to the Brightest Kind of Darkness. BKoD was one of my favorite reads last year (read my gushing review) and with this second mind-blowing installment, this is quickly becoming one of my favorite YA Dark/Paranormal Romance series out there! Actually, Lucid is definitely in my top 5 PNR books I've read this year so far (if not the best!)

Once again, my thoughts are all over the place and I don't even know where to start. BKoD was full of mystery, suspense, scary twists and unexpected events that left me reeling, but in Lucid, there's so much more of EVERYTHING! Arghhh! I couldn't catch my breath until the end, when I nearly passed out from all the astonishing events and the breath-taking twists! Lucid is, in one word, epic!

The end of the first book left us with some unanswered questions. Ethan needs to solve his problem with his parents, so he leaves to spend some time with them. In the meantime, Nara does everything she can to find out the answers to those questions: she makes new friends, new enemies, reinforces old relationships and does a lot of research to find out everything about the raven mystery - why and how is Ethan connected to them, what role do they play in her own life, what's the story behind the tattoo and the sword that appeared on Ethan's back after the final battle with Fate...

Seeking answers to these questions puts Nara in all sorts of dangerous, unpredictable situations. She digs deeper and she realizes that there's a connection between her ability and the ravens too - and there's some higher force that is not pleased by all her research and her findings. And, once again, her life (and sometimes the life of her close friends too) is in danger.

She misses Ethan and could really use his help with all the mysteries and drama, so she tries stay focused on her research:

The more I looked, the more information I collected for Ethan, which helped muffle the ache in my heart from his absence. So long as I focused on the research, I felt like a small part of him was still with me.


There's also a new transfer to her school from Wales, Drystan. He has a special ability of his own, which creates a connection and a friendship between them right from the start. Speaking of Drystan, OMG he's so awesome!! I love him! I really wish he could become the main character in another story (maybe a spin-off?), because he's too amazing to be just a side character in this series. He's funny, witty, badass, has a swoon-worthy accent and does parkour. He has super cool moves!* He helps Nara a lot, he even saves her life a few times and does everything he can to earn her trust. But rest assured, there's no confusion and no doubt that Nara's heart belongs to Ethan and their bond is truly special, so no love triangle here (well, not the usual kind, anyway).

Drystan was an open book with hidden passages.


*Sorry this quote is so long, but I can't help myself. This scene was too freaking cool!

I’d barely made it to the third floor landing when I saw Drystan grab hold of the metal railing just below me, then vault into the air. Curling up and over the stairwell turn, he shot like a bullet down to the second floor, skipping an entire flight of stairs with his pivoting move. Astonished, I glanced through the stairwell to see him land in a smooth crouch, as if he’d landed exactly where and how he’d planned. With furious determination hardening his face, he took off from the second floor toward the first floor in a similar fashion. Partway into his swing around the turn in the stairwell, he spread his legs and caught himself against the opposite wall in a fast halt. I blinked at the show of upper-body strength he’d displayed, hanging for a split second above the stairs, before he pushed off the wall with this other leg. In a backward curling motion worthy of a seasoned gymnast, he swung his body back around, grabbing on to the bend of the stairwell’s railing like parallel bars.

Even though Drystan is always there to help her and the things with her best friend and with her mom go well, Nara still has a lot of things to worry about and to deal with on her own. But she never gives up,  never backs down, no matter how dangerous and powerful the things she has to face are. She turns up to be one super awesome, kickass heroine! She's a real fighter. Her love, strength, courage and determination are not only absolutely incredible, but also very inspiring.

And Ethan... OMG, Ethan! *fans self* Though he is not that present in the story, he totally makes up for that in the last part of the book. If there was a Top #10 Character Entrances in a YA Book, Ethan's would be number 1, no doubt about it. Seriously. He just shows up out of nowhere, all dark and sexy and powerful and super badass.... And then there's fighting, then there's some super hot scenes and then there's some heart-melting lines.... *dies* That is a hard act to follow, I'm telling you!

Every bone in my body melted at the heated look in his gaze as he stared at my lips with hungry intent. But instead of kissing me, he pressed his lips tenderly to my forehead and spoke in a desperate whisper, “You totally break me apart, Nara. You’re the only one who has the power to do that. You consume me.” I wrapped my arms around his waist and met his tortured gaze, hoping he saw all the love I felt for him reflected in my eyes.


Actually, it feels like this entire book is a hard act to follow. It's the kind of book you set your rating system after. And if I don't get to read any other YA Paranormal book by the end of the year, I'll be satisfied that I've already read one the best. ;)

The whole story is gritty, intense, suspenseful, full of action, mystery and many twists. And there's still so much more to find out! I don't think I breathed at all while I read the last 15% or so of the book. There was so much tension, action, knees-buckling romance and pure awesomeness, that it left me speechless and dying to read the next book. There were some revelations at the end that I'm sure will change a lot of things for the characters and for the entire series. I can't wait to see where the story goes!

P.T. Michelle's has such a fascinating way with words! Her writing is beautiful, captivating and flows smoothly. The entire plot is powerful, very well developed and most importantly, very original. And I've said it before: I love books written by authors who have the experience of writing Adult books before. I don't know how to explain it, but there just seems to be something... more about them. (I'm not talking only about the romantic aspects either).

Just like Brightest Kind of Darkness, Lucid grabs you by the throat right from the first chapter and doesn't let go until the end. It leaves you breathless and needing the next book in the series STAT!

“I’m the light, Drystan. I’ll be fine.” I started to turn, but Drystan clasped my wrist. “If there’s enough darkness, even light can be completely consumed by it, Nara.” “Not if it’s the brightest kind of darkness.”


Though Ethan hadn’t said a word, I’d felt his emotions. His kiss had been intimate and boldly possessive, as if he’d just branded me, and an overwhelming, tender, “I claim you” message settled in my heart. You’re mine too, Ethan.

*Review copy provided by the author in exchange for my honest opinion. THANK YOU! 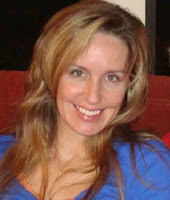 P.T. Michelle is author of the young adult series BRIGHTEST KIND OF DARKNESS. When P.T. isn’t writing, she can usually be found reading or taking pictures of landscapes, sunsets and anything beautiful or odd in nature.

Have an amazing week!