*New Adult Monday is a feature started by Danny at Bewitched Bookworms to share the love for New Adult literature, our latest bookish obsession. To learn more about the feature and the genre read  Danny’s New Adult Discussion post or my first post.
*** 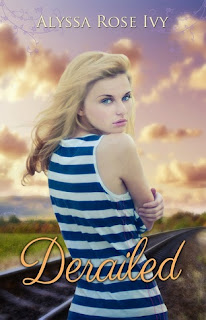 When you're lost, sometimes the only place you can go is home.

Broken over the death of her fiancé, Molly leaves law school to return to her childhood home in North Carolina. Expecting to lay low until she can figure out what else to do with her life, she finds herself in the arms of her high school sweetheart, the boy who represents everything from the past she tried to leave behind.

Looking for an escape, she instead finds a way back to the girl she almost forgot existed and a future she never dreamed possible.

My thoughts:
Derailed was a sweet, heart-warming story about loss, love, self-discovery, healing and second chances.
When her fiancé died, Molly's entire life crumbled to pieces. Living in the same city, same apartment, alone, with all the memories of her life with Adam and her grief and guilt over his death, was unbearable. And she realized that being an attorney wasn't what she really wanted either. So she decided to go back to her home town, at least for a little while, until she figured out what she wanted to do with her life. But there was an empty house and old, painful memories waiting for her there as well, and facing all that proved to be harder than she had expected.

Gazing out the window, I watched the town, my town. Every block held memories, the only memories I had without Adam. Unfortunately, even those memories hurt.

She met some old friends, got a job and tried to put up a good front, at least for the sake of all the people who cared about her.
But it wasn't easy. And when she met her ex-boyfriend, things got even more complicated. Old memories, thoughts and feelings started to surface. Plus, that chemistry and passion that always pulled them together were still there, making it impossible for her to stay away from him. Still, there was nothing worse than the guilt and self-loathing that she constantly felt, eating her alive and making her keep everyone at a safe distance - especially Ben (her ex).
She was scared, insecure and heartbroken and tried to keep everything to herself. She was convinced that she didn't deserve anyone's love, compassion or understanding. But Ben would have none of that. He never really got over her, even though she broke his heart when she went away for collage. He wanted her back and he would do anything to get past her barriers, to help her heal and to prove her that they still loved each other and that they belonged together.

I turned around to look at him. His brown eyes still had the friendliness they always did, but he looked so much older. Maybe it was another five years spent in the sun, or just time passing, but he certainly didn’t look like the same boy I left. He braced his arms on the railing, looking down at me. “You look so sad.” “That’s not really what a girl wants to hear.” I tried to make a joke of it. “You still look beautiful, but you look sad. What can I do to change that?” “You don’t have to change it. I’m used to feeling this way.”

She kept thinking that she didn't deserve his love, but she couldn't stay away from him either.

I knew I wasn’t good for him, but I couldn’t stay away. Every time I thought I’d pushed him from my head, his smile would show up in my mind again.

He was charming, fun and helped her a lot. He was passionate and brought back to life the wild, playful side of her. And they got to spend more time together, to have fun and to realize that their connection was too strong to ignore or to pretend it was just something friendly and casual. Maybe there was hope for them, after all...

Ben kept his word. He did help me forget. But with his gentle lovemaking that night, he also made me remember something too—how much I loved him— and that terrified me more than any nightmares or memories could. Whatever it was that Ben and I were doing, it wasn’t casual.

They both had past issues to solve, guilt and pain to overcome. They had to learn to trust, forgive, forget and move on. And they did, eventually. Because they loved and completed each other like no one else ever could. Molly had to learn that everyone did mistakes, that not everything that went wrong around her was her fault and that self destruction wouldn't solve anything. And Ben was right there, every step of the way, caring, thoughtful and with a positive attitude, making her realize that they can be in love and happy together.

“Just think of how much you’ve been through. I hate to think of you suffering through so much alone. Never again. I promise I’m not going to let you down this time.”

“I never believed there was anyone else out there. I knew completely that no one else would ever make me feel the way you did. You were the best thing that ever happened to me, and from the day I realized I loved you, I never even considered a future without you.”

How sweet and heart-melting is that? I loved Ben!:D He knew he made mistakes in the past and hurt her as well, but he did everything he could to make up for that. He could be playful, but he could be serious as well. He was strong and ambitious when Molly was insecure and wanted to give up or hide behind her protective walls. He fought for her even when she pushed him away. And I know that Molly thought that keeping him at a distance was better for him, but I couldn't help but feel like sometimes she was a little selfish, too. Anyway, they balanced and completed each other well, in the end, and got the happy ending they both needed.
There were a few things that seemed to happen too fast - or too slow, considering the circumstances at the moment, but overall, I really loved this story! It was so sweet and inspiring, even though it was heartbreaking at times. I liked that the characters and everything they went through was very raw and realistic, it made it so easy to connect with them, feel for them and wish only happiness for them!
It was a beautiful story about hope and acceptance, letting go and moving on, dealing with grief, guilt and learning to live, trust and open up again, learning that it's never too late to find your own path or to love and be loved. And I can't wait to read the next book in this series - we already met the main characters here and I'm looking forward to seeing them again and reading about their HEA! :D

*Review copy provided by the author in exchange for my honest opinion. 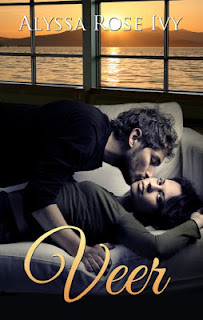