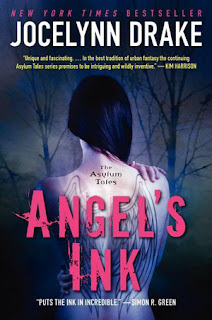 Looking for a tattoo—and maybe a little something extra: a burst of good luck, a dollop of true love, or even a hex on an ex? Head to the quiet and mysterious Gage, the best skin artist in town. Using unique potions—a blend of extraordinary ingredients and special inks—to etch the right symbol, he can fulfill any heart's desire. But in a place like Low Town, where elves, faeries, trolls, werewolves, and vampires happily walk among humanity, everything has its price.

No one knows that better than Gage. Turning his back on his own kind, he left the magical Ivory Tower where cruel witches and warlocks rule, a decision that cost him the right to practice magic. And if he disobeys, his punishment—execution—will be swift.

Though he's tried to fly under the radar, Gage can't hide from powerful warlocks who want him dead—or the secrets of his own past. But with the help of his friends, Trixie, a gorgeous elf who hides her true identity, and a hulking troll named Bronx, Gage might just make it through this enchanted world alive.

After reading the two prequel novellas, The Asylum Interviews: Bronx and Trixie, I' ve been eager to get lost again in this fantastic world Jocelynn Drake has created. And I loved this first full length novel; The Asylum Tales series goes right on my auto-buy list! If you like Urban Fantasy, you'll definitely want to try this one!

I read Angel's Ink a few days ago, but I had to let it sink in between writing my review. It's a very complex, well developed novel and a lot of things happen in it!

Gage is a strong, unique, very likeable main character. You don't see a Urban Fantasy series told from a guy's POV very often, so this was refreshing and I really liked his voice. He's witty and fun, but he's also powerful and  kind of mysterious. He used to be a warlock in training, but the world of warlocks and witches, ruled by the Ivory Towers, was nasty and dangerous, because they thought they were above everyone else and used their powers to control everyone. So he didn't want to be a part of that and he stepped out of their world. They allowed him to stay alive and live outside the Towers only as long as he didn't use magic in any other way than for self defense.

“Why you’ve chosen to live among these useless flesh bags is beyond me.”
“That’s why,” I said in clipped tones. I refused to view humans as little more than chattel.

But Gage's power is unique and stronger than anyone else's and he always seems to be in some kind of trouble with the other creatures, so he lives on the edge, constantly in danger of being captured by the evil warlocks who watch his every move.

Gage is also the best tattoo artist in the area, so he goes by with his tattoo shop, Asylum, using his incredible talent and many special potions and ingredients to give people more than a simple tattoo.

Tattooing in itself could be a lucrative business, but it was the potions added to the ink that made this venture truly worthwhile.


You'd think he'd be fine with his tattoo shop and his friends and co-workers, Bronx and Trixie, at least at the beginning of the story - but you'd be wrong. Trouble seems to follow him everywhere and it knocks on his door from the very first few pages and then he can barely catch his breath for the entire novel. Phew, what a rollercoaster of a ride!

The story has many layers and sub-plots, but it still seems like we only got a glimpse of this character and his world. With every deadly situation he seems to overcome, another, more dangerous one appears. And like that wasn't enough, the warlocks are always waiting for him to make the wrong move so they can finally get rid of him - for good. You never know what's going to happen next, what to expect from this world. There are lots of twists and suspenseful situations that keep you on the edge of your seat. Seriously, at some point, it was like every creature in town was gunning for Gage for some reason or another and they had incredibly bad timing - not only did they catch him all in a very small time frame (he was almost killed several times in one single day!), but he was already in the process of solving another deadly situation.

Anyway, Gage is a very complex character, who always seems to have a few tricks up his sleeve. He has lots of connection and resources and the support of his friends, who help him every time he needs them, despite the fact that he has always been secretive and closed off about who and what he is or what he can do. But it's hard to keep a low profile in this dangerous, complicated world where all sorts of the creatures roam the city and want something from you. Speaking of creatures, wow, there are so many of them and I loved learning a bit about them too! It's fascinating, really! Elves, warlocks, witches, trolls, vampires, werewolves, goblins and even the Grip Reaper made an appearance. :D

It also helped that the sun was still high in the sky. The vampires were still abed and the trolls were lurking in dark homes, waiting for the sun to finally set. While goblins could come and go during the day, they preferred to wait until at least dusk before showing their ugly mugs out of doors. There were a few other faerie folk that could be a nuisance, but I wasn’t likely to find them here unless they were really down on their luck.

I really liked the main story of the book - well, the story that started it all. It was very touching. Tara, a human girl, stopped by his parlor to get a tattoo for a... special occasion. Someone had recommended him and he did, indeed, an amazing, beautiful tattoo for her (see the cover). But he was touched by her story and wanted to help her, so he added some never-before-used ingredients to the ink - and it all went wrong. The tattoo had some very powerful, scary side effects that caught the attention of the wrong people and put the balance of the supernatural world at risk. Trying to fix that only got him into more serious trouble, since he had to go to questionable sources for help and to do all sorts of things that he wasn't allowed to.

And speaking of tattoos, I really loved how Ms Drake approached this subject. It's all very detailed, specific, imaginative and realistic at the same time. You get to see what ingredients the artists use, what colors, the technique, everything. This was one of my favorite part of the novel. I mean, magic and tattoos? Yes, please!

Like I mentioned in my mini-reviews for the prequels, I really liked both Bronx and Trixie and the way they all supported and completed each other as a group. At the beginning, they all have their secrets and try keep a relative distance from each other, but by the end of the book, that barrier between them disappears and they make an unbreakable connection. Trixie was awesome as the love interest: she was fun, compassionate, loyal and also very mysterious. She has her own secrets and troubled past and when it catches up with her, Gage and Bronx don't hesitate to help her. The romance part of the story feels very natural, subtle, yet undeniably powerful by the end:

Laying both of my hands flat against her back, I held her tight for a second, not moving, savoring the feel of her. “Trixie . . . I can’t do this if it’s just . . . I need more than . . .” My rough voice drifted off as I struggled to find the right words. I knew the timing was bad. Her life was a mess and mine was a national disaster, but I couldn’t stop myself from grasping this one perfect moment even if I was forcing her to slip through my fingers. Trixie stopped kissing me to meet my gaze, tears glistening in her eyes, looking so much like ivy leaves after a summer rain. Taking my right hand, she placed it on her chest so that I could feel her frantically pounding heart under my fingertips. “I give you the beat of my heart, the breath in my lungs, and the joy in my soul. You are mine and I am yours.” ♥ ♥ ♥

I haven't read Jocelynn Drake's other series (I know, shame on me!), but after reading the two novellas, I though I had an idea of what to expect here. And wow, was I wrong! When the most dire crisis comes, things get seriously dark, messy and downright scary! There are some badass fighting scenes, with all sorts of kickass effects and magic. Awesomeness!

Pushing to my feet, I thrust one hand toward the sky, summoning a boiling cauldron of black clouds. Thunder rolled above us and lightning jumped through the sky. A part of me longed for a nice sharp blade, but I would make do with the power from the heavens.

And it's all very well done and well placed - you can tell that the author has experience with the UF world - with dark, twisted, complicated plots and with writing strong, complex characters. You can see it in the masterful writing style and in the way everything seems natural and flows easily, even though lots of things happen and there are many new elements introduced. Everything is very well thought out and balanced. There's nothing tentative, sloppy or hesitant about this book - not even when it comes to hurting the characters - she doesn't shy away from putting them trough hell or from pushing all their limits. And I loved that, it gave the book an edgy feeling and made me connect with the characters better.

Gage kind of reminded me of Rachel Morgan (The Hollows by Kim Harrison) sometimes. He has the snarky attitude, stubbornness and knack for getting into trouble when he acts before he thinks that Rachel has sometimes as well (I think they'd go along very well - and we'd all be lost if the safety of the world was in their hands. :)) *just kidding*)

“So you took a chance with some powerful magic without actually considering the consequences of your actions? What were you thinking?”

Anyway, there were a few moments here and there where the story seemed kind of slow or when too many things happened at once and it was a bit confusing, but overall, this was a great first novel in a series! It's unique, refreshing and very interesting and I'm looking forward to following the characters on more crazy adventures!

Get the book: Amazon / B & N / The Book Depository