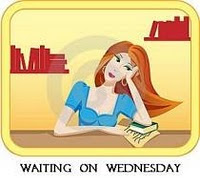 Waiting On Wednesday is a weekly event, hosted by Jill at Breaking the Spine, that spotlights upcoming releases that we're eagerly anticipating.

City of Fallen Angels is the fourth book in the bestselling series The Mortal Instruments.

“City of Fallen Angels takes place two months after the events of City of Glass. In it, a mysterious someone’s killing the Shadowhunters who used to be in Valentine’s Circle and displaying their bodies around New York City in a manner designed to provoke hostility between Downworlders and Shadowhunters, leaving tensions running high in the city and disrupting Clary’s plan to lead as normal a life as she can — training to be a Shadowhunter, and pursuing her relationship with Jace. As Jace and Clary delve into the issue of the murdered Shadowhunters, they discover a mystery that has deeply personal consequences for them — consequences that may strengthen their relationship, or rip it apart forever. Meanwhile, internecine warfare among vampires is tearing the Downworld community apart, and only Simon — the Daylighter who everyone wants on their side — can decide the outcome; too bad he wants nothing to do with Downworld politics. Love, blood, betrayal and revenge: the stakes are higher than ever in City of Fallen Angels.” (Goodreads)

*Now that the first chapter is available and I finally got a taste of this book (if you missed the chapter hunt last week, here it is, with a few pages extra), I'm even more excited about City of Fallen Angels. This is one of my favorite YA series: Cassie has a very beautiful and entertaining writing style, her characters are fun to read and her world is very unique and interesting. I can't wait to read more about Jace! *swoon*
**This book is also part of my A-Z Reading Challenge.

UPDATE: I've already read the first three books in the series and totally LOVED them, but here, in Romania, the first book is just coming out next month. Finally! Here's our cover (and a pre-order link) 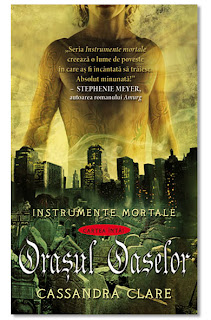 What if you knew exactly when you would die?

When sixteen-year-old Rhine Ellery is taken by the Gatherers to become a bride, she enters a world of wealth and privilege. Despite her husband Linden's genuine love for her, and a tenuous trust among her sister wives, Rhine has one purpose: to escape—to find her twin brother and go home.

But Rhine has more to contend with than losing her freedom. Linden's eccentric father is bent on finding an antidote to the genetic virus that is getting closer to taking his son, even if it means collecting corpses in order to test his experiments. With the help of Gabriel, a servant Rhine is growing dangerously attracted to, Rhine attempts to break free, in the limted time she has left. (Goodreads)

*I don't know much about Wither, but it does sound like a nice, refreshing book. Anyway, I'd buy it for the cover alone! Isn't it pretty?:D
**This book is part of both the A-Z Reading Challenge and the Debut Author Challege 2011. I can't wait to read it! (actually, my fingers are itching to pre-order it right now, but my card is making weird noises and pointing angrily at my huge TBR list LOL. Oh well...)


Now tell me what are you waiting on today!;)
See ya!