Before getting to my gushy review, I'll allow you a few moments to stare at this gorgeous cover and all its stunning details: ;) 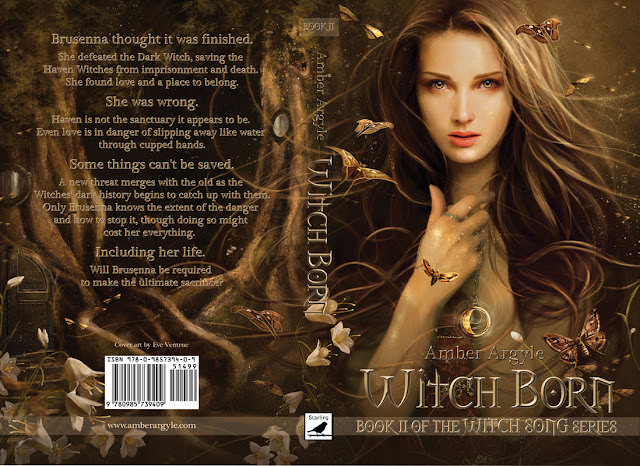 Brusenna thought it was finished.

She defeated the Dark Witch, saving the Haven Witches from imprisonment and death. She found love and a place to belong.

Haven is not the sanctuary it appears to be. Even love is in danger of slipping away like water through cupped hands.

Some things can't be saved.

A new threat merges with the old as the Witches’ dark history begins to catch up with them. Only Brusenna knows the extent of the danger and how to stop it, though doing so might cost her everything.

Will Brusenna be required to make the ultimate sacrifice?

O.M.G. If Witch Song was amazing, Witch Born was downright mind-blowing! Usually, I'm not one to dwell on the ending of a series; if the characters get their closure and/or their HEA, I'm OK with it and I move on; this time though, I really, really feel like stalking Amber Argyle and begging her to write more books in this world. I didn't want the story to end!!! *sob*

If you loved Witch Song, but you're worried that Witch Born might have some second-book-in-a-series-syndrome symptoms... Do. Not. Worry. In fact, read it as soon as possible, because Witch Born is so much MORE! (After reading the first book, I didn't think the second one could get better, but I was wrong). More tension, suspense, intrigue, mystery, action, adventures, drama, heartbreak, but more power, magic, wonderment, beauty, love and hope as well.  The plot thickens, the stakes are higher and everything changes: the characters, the world around them, the power of the elements, and nothing and no one is what they seem anymore. You never know what to expect, if you can trust or believe anyone. There are twists, turns and dangerous, scary, unpredictable situations all throughout the book. Phew, what a ride!

Senna thought that once she saved Haven and the Witches, all was going to be well. But she was wrong. There's no peace and happily ever after at Haven. Actually, living there is not easy at all: there's tension everywhere: the Witches don't trust her, some of them fear her and she still has a lot to learn. But she does her best to adjust and to recover after the events from the previous book. Not an easy thing to do, when her life is in danger (again!): there seems to be a new, bigger threat on the horizon, there might even be a traitor in their midst and everyone keeps secrets from her, even the people closest to her. Some new powers and old legends surface and no one is safe anymore. She knows something huge, dangerous and life changing is going to happen, but she doesn't know what. Yet. Her powers are changing as well, but, unfortunately, "her power came with a price—a burden every Witch born bore, especially one as strong as her." She feels helpless, overwhelmed and out of control, but, as always, she's fierce and determined and she's set to do anything to figure it out and to put an end to all the chaos around her: “I refuse to live in ignorance and helplessness."

And like that wasn't bad enough, things with Joshen are not going well either: he loves her, he wants to protect her and he would do anything to keep her safe, even if that means to stay in her way and to try to stop her from getting involved in anything that could threaten her life.

“So I’m just supposed to accept that I might lose you?” His voice was thick with anger.
She rubbed her face. “I am Witch born. It’s what I am.”
He took a step towards her. “What you are is my love. ”


But all she wants is to keep fighting and trying to make things right in the world again.

“I spent too much time on Haven doing the smart thing,” she replied. “Now I’m going to do the right thing.”

Like I said, in Witch Born the stakes are even higher. Senna's powers grow and grow every day, no one trusts her and she can't trust anyone either - there's danger, secrets and conspiracies everywhere around her and there's something more powerful and dangerous than anyone ever imaged even existed coming from some higher forces. Obviously, she has to act. Fast. But at least this time around, she's not alone when she sets out on her journey to save the world. That doesn't mean she's safe though; she makes new allies, as well as new enemies, and when the situation gets seriously dire, she has to turn to unbelievable sources for help.

There were so many twists, surprises and  "OMG I would have never seen that one coming!" moments in the second part of the book, they made my head spin. While reading the last chapters of the story, my stomach was twisted into knots, my mind was reeling, my emotions were all over the place, I was gripping the edges of my seat and I even got teary-eyed at some point. When something totally unpredictable and heartbreaking happened, I literally wanted to scream "WHY??? HOW COULD YOU DO THAT???" at the author, but that would have been incredibly rude, not to mention that I would have had to interrupt my reading, which was inconceivable. So I kept reading, my heart in my throat, my fingers crossed, hoping for the best. And of course, I loved every second of it. :D
The ending was bittersweet: full of action, tension and impossible situations, yet emotional, sweet, and heart-melting; it brought the hope and closure the characters and their story needed. It was perfect.

I really liked how the characters and their relationships developed. They went through a lot, changed and learned a lot about the world and about themselves. With every new challenge, Senna grew and learned to believe in herself, in love, in a better future.

Just like in Witch Song, in Witch Born the nature, the magic and the elements are as much characters of the story as the Witches and everyone else:

"Wind was like a half-wild colt—full of wild energy. Earth reminded her of an old man with arthritic bones—slow and sleepy. Water was like a temperamental woman—full of secret moods and hidden places. Sunlight was a playful child—subject to sulks and fits of laughter. And plants…"


Add to all that the beautiful, lyrical writing, the stunning world building, the fast-paced plot, the strong characters, and you get a magnificent (and no, I don't think I'm exaggerating at all saying that) story that will stay with you for days!

I feel like my review doesn't make the book any justice, but I highly recommend it! Also, if you like books like The Iron Fey series, Born Wicked or The Girl of Fire and Thorns, I'm sure you'll enjoy this one (maybe even more.;))

Oh, and I need to mention the scene from the cover. It was so beautiful, so magical, yet so vivid and realistic, I could only stare in awe at my screen:

A soft touch startled her. She looked down to see a moth skimming along her palm. Another landed on her wrist. She brought the insect close, studying the intricate patterns on its wings. A third moth clung to Senna’s smallest finger, its tiny legs tickling so she had to fight to keep from wiggling and scaring the moths away.


The rest of the scene is kind of spoiler-y, but it was all amazing and played an important role in the story.


**Review copy provided by the author in exchange for my honest opinion. THANK YOU!