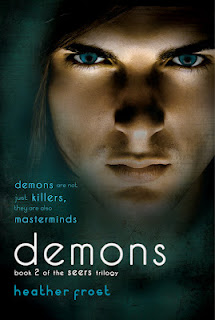 Kate’s life is far from normal. She can see auras, her boyfriend is immortal, and her powers make her a target. But now that the Demon Lord is hunting her, things are about to go from dangerous to truly deadly. Packed with action, mind-blowing plot twists, and characters you can’t get enough of, this is a fast-paced, heart-pounding read from cover to cover.

Wow! I still need to recover after that ending!!! Way to let us hanging, Heather!

But I should start with the beginning. And I should tell you that even though Demons is the second book in the series and I highly recommend you read Seers first (which is all full of awesome, as you can see in my review here), you can still jump right into this one. Heather Frost does give us a little info and some details on the background at the beginning of the book, and you'll catch on of what happened in the previous book as the story goes on. My point: of course it will be better if you read the first book too, but you won't be completely in the dark if you don't.

That being said, this second installment in the Seers trilogy was really awesome and even better that the first! You can see some improvements in the story arc, and it's more action packed and fast paced than the first. Pieces of the big puzzle start to fall into place - and wow, what a puzzle they make! So, no second book in the series syndrome here, phew!

You can hardly catch your breath throughout this story. There's always something going on and the suspense is always growing. Kate tries to maintain some sort of normalcy and balance between her human life, the people she loves and the supernatural live - but all the Seers, Guardians and Demons problems make that hard to accomplish. There's danger, secrets, and mysteries everywhere and she doesn't even know who she can trust. Not to mention that she changes a lot and she has some secrets of her own - which is painful and stressful as she feels guilty and only wants to make things right and not to have anyone hurt. But the real problem is that no one is safe anymore - not even her Guardians, who are supposed to be all immortal, badass and invincible. As she tries to make sense of the things happening to her and around her, the constant danger of the Demon Lord keeps everyone on the edge as well. At least she has the support, devotion and love of her Guardian, Patrick, who will do anything - and I do mean, anything - to protect her, and of her friends who are dragged into all the mess as well, even if she wanted them safe and as far away from the danger as possible.

I loved the short glimpses we got from Patrick's POV - I wish there were more of them. Actually, I wish there were more of him, period. The fact that he isn't the all powerful, invincible Guardian we got used to in the previous book makes for some seriously tense, heartbreaking and scary situations. Yes, he's still badass, loving and protective and doing everything in his power to save the day, but he's got his own issues now. Also, he's one of the most selfless, caring main character I've ever met and sometimes I wished he hadn't put everyone else's well being above his own and just take care of himself for once! At least the love between him and Kate seems stronger than ever and holds them together:

Kate’s presence in my life had been unexpected. Life-altering. Wonderful. Heart-rending. Something about her gave me a new sense of purpose—a second chance at happiness.

Their relationship isn't perfect, but it' s the best they can have at the moment:

Our relationship was beautiful, albeit unique. He was two hundred and thirty, and I was eighteen. He was immortal, and I wasn’t. He’d been born in the greenest spot on Earth, and I lived in a desert. But we fit together perfectly, despite our differences. True, I knew we’d run into problems—it was inevitable, considering everything. But for now, things were great. We didn’t think too far into the future, which was fine by me.

We learn so much more about the characters, about the Seers, Guardians, Demons and their world! Things that you would have never guessed and that make the story so much more unique and fascinating. There's also a new cast of characters that make everything more interesting and entertaining. I love Lee and Toni and the new Guardians, they are very supportive and their help means a lot in deadly situations, but they're also lots of fun and true best friends, despite the circumstances.

One of the things I really like about this series is that Heather Frost's writing style is smooth and natural. It has an authentic, flowing quality to it and it grabs you from the first page and compels you to read on, until you finish the book. And despite all the things you find out in this story, everything comes into place easily and at the right moment, so you never feel lost or overwhelmed. It makes everything seem so real! You don't feel like you're reading a book, but like you're actually watching someone's life from the sidelines. Someone who is very close to Kate, because you can actually feel everything she feels: her inner pain and struggles, you can share her thoughts and emotions and by the end, you just want to hug her and tell her everything is going to be ok.

And speaking of Kate, she really grows in this story; she becomes stronger and more mature and determined with every new challenge she has to deal with. She goes through a lot, but she keeps fighting, even though her current situation seems to be too dangerous and impossible to get out of. Yes, she does her share of mistakes, but at the end of the day, that only makes her more likeable and easy to relate to.

I refused to dissolve into tears, and I knew they were only seconds away if I continued to feel and think. I needed to be strong. Even if I was losing hope as rapidly as the others, I couldn’t let it show. I needed to be the positive one. The believing one. Patrick needed that. He needed me.

They are each other's rock; their love and commitment are so incredible and heart-melting! When the situation becomes something of life and death and there's only one way to go, they still have each other to count on. I really felt for them.

But... Even though the story was very well balanced, the characters likeable and kickass and the plot full of action and twists, I didn't really connect with the entire story the way I would have liked to. It may be because the series I read right before this one was still somewhere in the back of my mind (yes, I know it's wrong to make comparisons and such, but the events and the characters there were too mind blowing to forget in a few hours), or maybe I wasn't in the right mood... I don't know, but something didn't click.

Anyway, there's a lot of potential to this story and Heather Frost is so young and incredibly talented, so I'll definitely read the next book as soon as it comes out. Did I mention the killer (umm... literally) cliffhanger at the end? Yup, I need to see where that one is going to lead us.

Bottom line: Demons is a great follow up to Seers: the same compelling writing style, but more tension, action, twists and turns, kickbutt characters, secrets, mystery, romance, drama, heartbreak and a killer ending that promise a mind blowing, emotional ending! You have to give it a try, especially if you like action packed YA Paranormal Romances!:)

*Review copy provided by the author in exchange of my honest opinion. Thank you!

P.S. If you want to learn more about the awesome Patrick, to get a behind the scenes glimpse into his character and his relationship with Kate, you can read his interview here.

Have a great weekend!