Review: What Kills Me by Wynne Channing 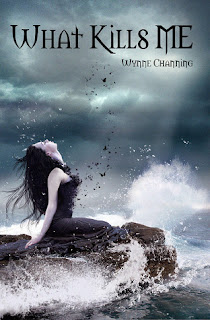 (The synopsis is a bit spoiler-y)

An ancient prophecy warns of a girl destined to cause the extinction of the vampire race.

So when 17-year-old Axelia falls into a sacred well filled with blood and emerges a vampire, the immortal empire believes she is this legendary destroyer. Hunted by soldiers and mercenaries, Axelia and her reluctant ally, the vampire bladesmith Lucas, must battle to survive.

How will she convince the empire that she is just an innocent teenager-turned bloodsucker and not a creature of destruction? And if she cannot, can a vampire who is afraid of bugs summon the courage to fight a nation of immortals?

My thoughts:
This book was so badass! That's the best way to describe it if you want a one-word description. Filled with wit, adventure, suspense, drama, romance, kickbutt characters, lots of twists and turns and  non-stop action, What Kills Me is a one-sit-read that keeps you on the edge of your seat and gives you a great, interesting story and awesome characters that you will definitely get attached to and want to read more and more about.
The beginning of the story may be a little misleading: we have a teenage girl who goes to Italy to study for the summer. All is nice and dreamy - beautiful setting, summery atmosphere, witty heroine trying to have some fun and a sweet romance in vacation. She even meets the perfect, handsome, gallant boy and everything seems too good to be true. Well, that's because it is - soon her dreamy adventure turns into a nightmare she can't escape.
As if someone trying to kill her wasn't bad enough, Axelia wakes up in a scary place with some weird people who claim she's now a vampire. She doesn't even get a chance to come to terms with that crazy idea and to make her escape, because suddenly some dangerous looking men barge in and take her away for being "an abomination". Her becoming a vampire was very unusual and apparently poses a danger for the entire vampire race, so she must answer to the Empress, their ruler, immediately.
She's much stronger that she realized, so she manages to escape the blood sucking soldiers the first time, but then they're always after her. And that's when the true adventure begins. Always on the run, scared, far away from her family and with no way to contact them, surviving and evading all the soldiers and mercenaries who are after her is a real struggle. But she runs into Lucas and though they don't meet under the best circumstances, he becomes the only person she can rely on. They both set out on a journey filled with tension, danger, action, unpredictable situations and thrills that will change them and get them really close to each other.

He always looked brooding and preoccupied, but I could never tell what was going through his head. I didn’t know how he was dealing with this ordeal. I chose to interpret his silence as strength. I needed something to believe in. He was all I had left.

Axelia is such a cool character! I'll admit though that she doesn't make the best first impression. I mean, you don't go out into the dark (without telling anyone where you are going), follow a stranger into a closed, creepy-looking building in a remote place just like that, and then you're surprised when said stranger wants to kill you, right? *head desk*

I should have never trusted Paolo. My entire life I had been a good, cautious person. Just this once I had wanted a little adventure—and now this. Why? Why me?

Anyway, her misjudgment was somehow necessary to get the story going. She has to learn from her mistake, to pay the consequences. Of course, she doesn't deserve all the terror and craziness her new 'life' throws at her, but she's brave, stubborn and doesn't give up even in the worst situations. She's feisty, courageous and meets the danger head on; add to that her new developed vampire skills and you get a seriously kickbutt heroine:

I expected to crash onto the pavement, the concrete scraping off patches of skin. Except that time seemed to slow while I was in mid air. Landing with one foot on the street and letting the momentum carry me forward, I put my right hand down and did a frontward flip. I stood and turned to look at the truck speeding away.

Desperate, I searched for a weapon, a distraction, and I picked up the car door. They [the mercenaries] were closing in on me. With a cry, I launched the door at them. It sailed through the air like a disk. They both leaped to avoid it, but it caught one of them in the midsection. The vampire appeared to jump over it, but just his top half flopped over and he fell to the ground in two parts. The door kept flying through the air, and a split second later embedded itself into the side of the black sedan with a crash.

Her relationship with Lucas has a rocky start (they kind of hate each other at the beginning, but they have to put up with each other to move on and survive the craziness around them), but it grows into something very special and heart-warming. It's subtle, yet intense.

He finally glanced over at me. The left corner of his lip curled and he winked. I smiled. I loved that. It filled the emptiness inside of me. It was a flash of light in the darkness.

And their banter is so adorable and hilarious!

He didn’t respond so I started to mutter to myself. “I’m going to miss cheese. Except blue cheese. That tastes like feet.”
“You’re a vampire now,” he said. “All human food is going to taste like feet.”
“Everything?”
“Hey, schoolgirl.”
“Yes?”
“Stop talking.”
“I’m sorry,” I said. “I talk when I’m nervous or upset. My sister has diabetes so I used to tell her jokes to distract her from needles when we were kids. But even she thinks it’s annoying now.” He snapped his fingers toward the door.

“Schoolgirl?”
“Yeah?” I stopped close behind him and looked around. “What?”
“You talk too much.”
“Maybe you talk too little.”
“You’re going to live forever. Pace yourself.”


He walked over to me and took hold of both my arms.
“Hey,” he said. “You are not a monster.”
“I’m not like you. I know,” I said.
“No. You’re not like us. You are different. But you are amazing.”
He lifted my chin with his finger. I looked up at his face, searching for sarcasm. Instead I found a softness in his expression, something I’d never seen before. Even in the dimness his emerald eyes were brilliant.

They care and depend on each other more than any of them realizes:

“If he [Lucas] wasn’t always rescuing me or fighting for me or telling me not to be a baby, I might be dead.”
“If you weren’t who you are, he might not have fought for you.”
“I just wish I could do more to protect him.”
“You are what keeps him going.” (Lucas' sire)

Of course, you can't miss the swoon worthy moments:

For a moment we looked at each other. I tried to read his eyes as they scanned my face. He parted his lips as if to speak but didn’t. I had backed him against the stove so that our stomachs were almost touching. His hands searched for a casual resting position until he rested them on his hips. A cold trickle ran down my back, and I realized at that moment that I was still in a towel.

We sank down together and bobbed up, laughing. I slung my arm around his shoulders and the side of my body was pressed against his. Beneath his soft skin his muscles were hard, like stone. Our laughter trailed away. I felt his hand on my waist. His legs brushed mine as we treaded water. I searched his face. His expression was undecipherable. He just looked into my eyes, clenched his jaw, and swallowed. I looked at his lips. They gleamed from the water, the steam. I thought he might kiss me. I wanted him to. He put his other hand on my waist...

The writing is beautiful, compelling and flows smoothly. You wouldn't even think this is the author's debut novel; everything is very well balanced. And there's no such thing as taking a break or putting the book aside for a while.You just need to keep reading, because there are lots of twists and there's always something going on; you need to know what happens next to these characters.
So, in a nutshell:
Vampires? Check!
Interesting plot? Check!
Wit, biting humor and sarcasm? Check!
Kickbutt heroine? Check!
Swoon-worthy hero? Double check!
Romance? Check!
Non-stop action? Check!
Swords play? Check! (OMG the sword fights were so freaking awesome! I think I even cheered out loud a few times.:)))
All in all, I really loved this book. And that ending? Killer! I can't wait for the sequel! I need more Lucas STAT!

P.S. How gorgeous is that cover?! *Love*

She started writing horror/fantasy tales as a girl. She still has the first novel that she wrote when she was 10. It’s (unintentionally) hilarious.

Wynne loves telling stories and as a journalist, she has interviewed everyone from Daniel Radcliffe and Hugh Jackman to the president of the Maldives and Duchess Sarah Ferguson. The closest she has come to interviewing a vampire is sitting down with True Blood‘s Alexander Skarsgard (he didn’t bite).

She briefly considered calling her debut novel “Well” so then everyone would say: “Well written by Wynne Channing.” (hehe that would have been very appropriate btw)

Find Wynne: Website / Facebook / Twitter
Read the first chapters
Get the book (for only $2.99!)
Amazon US / Amazon UK / Kobo / B & N
Thank you to LibraryThing and Wynne Channing for providing me with the review copy!

Email ThisBlogThis!Share to TwitterShare to FacebookShare to Pinterest
Tags 2012 release, review, vampires, What Kills Me, Wynne Channing, YA