Hey!
Summer is almost over, but I'm not ready to let go of my summery, romantic, cute reads just yet. And here's yet another NA Contemporary book I read recently and really enjoyed (I'm also a host on the blog tour for this one, so stay tuned for an awesome interview with the author and a giveaway): 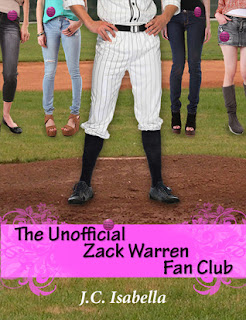 Welcome to the big leagues. To secrets and scandals. It's all about the game. Who's playing. Who's not. Who has no idea about the game. And...wait, what game are we playing?

I'll leave that for you to decide.

Where to start is the big question for Chloe Baker. How was she supposed to explain to Zack Warren that she started a fan club for him when she was a kid? It was just a game. A way to make friends and have fun. She never thought it would spiral out of control. And never. In a million, gazillion years, did she think it would follow her to college. How could she tell him her best friend Lana kept the club alive? That she had nothing to do with the craziness?

Chloe didn’t understand why she cared so much about Zack's opinion of her. She hated him. He hated her. They had very mutual feelings of dislike for each other. So he'd just hate her even more when or if he found out.

It's Zack’s junior year of college. He’s got things to worry about. Scouts from the major leagues. Baseball games. Contracts. Grades.... His father ran away to Vegas with Chloe's mother. He didn’t have time to worry about a girl. But he did. He worried about Chloe a lot, especially with that jerk Max sniffing around her. It's weird though, to like your stepsister, right?

But Zack could argue that he saw Chloe first. Way before his dad met her mom. He was too young to stake a claim. But just didn’t care anymore.

My thoughts:
This was such a fun, refreshing read! The kind of book that puts a smile on your face and makes you feel all warm and fuzzy. And it has some of my favorite qualities in Young Adult and New Adult lit: two alternate POVs, wit, humor, banter, sexual tension, original plot, romance... And did I mention alternate POVs? I just LOVE reading from a guy's POV!
***
Chloe thought that once she got to college, she'd get a new start. She'd get away from all the drama her friends pulled her into in high school and, most importantly, away from Zack Warren. She'd been wrong. Because not only her friends and their theatrics followed her at college, but Zack became her stepbrother - and suddenly, he's everywhere!
Chloe started The Unofficial Zack Warren Fan Club in third grade. She had a crush on him and the club seemed a fun idea at the time: she got to make new friends, spy on Zack, talk about him (about other things too) and the risk of being discovered was making everything more exciting. But then Zack started treating her badly and she didn't want to have anything to do with him  - or the silly club - anymore. She wanted out, but the club kept growing, getting more serious and gaining new members every year. She hoped that when they finished high school, the girls would grow up, get over their infatuation and stop worshiping the hot baseball player. No such luck. Now, the girls were here at collage too - because Zack was here as well. And things started to get out of control: her friend Lana was leading the club, treating it way too seriously: organizing meetings, making buttons, spying and spreading all sorts of rumors about Zack... They risked being discovered every day  - and if that happened, everyone would blame Chloe. So she kept trying to make them realize that what they were doing was ridiculous and they had to stop, but they turned their backs on her and kept playing their games. And like that wasn't bad and stressful enough, her mother married Zack's father and they all had to move in the same house, in the middle of nowhere. And the two of them didn't get along. At all.

He was just one of those guys. Zack Warren walked into a room with a cocky strut and a wicked glint in his eyes. Guys wanted to be him. Girls wanted to be with him.
As I stomped past the god of baseball, it wasn’t hard to understand why so many girls loved Zack. Sure, he was intriguing and strong, and so what if he had a killer smile? I just couldn’t bring myself to like him.
Ever since the fifth grade Zack and I have hated each other, and that’s never going change.


***
I love Zack! He's such an awesome character! Of course, he's hot and quirky and reading about his interactions with his friends was always hilarious, but there's also a tender, thoughtful side to him that no one seems to know about. He has a reputation as a player, but there's more to him than that. And Chloe really got to him, but for some reason, he always ended up acting poorly, defensive and sometimes aggressive around her. Which, of course, lead to tension, hilarious banter and witty dialogues! And when they have to move in together,  things get really interesting.

“I know you hate me. Why don’t we get this fight over so we can coexist without killing each other?” (...)
He laughed. “I don’t hate you, Baker.”
“Really?” I turned to look at him.
“I hate terrorists, men who hit women, and relish on hot dogs. I just find you very annoying.”
“I think you’re annoying too.”

But they want their newly married parents to be happy, so for their sake, Zack and Chloe decide they can try to be friends and act normal, at least when they are at home. But once they get over their animosity and start spending more time together, they also get to know each other better and to realize that there's more to both of them that meets the eye. Chloe realizes that most of the rumors about Zack are just that, crazy rumors and he's actually fun to be around. He's caring, protective and far from the bad boy stereotype who breaks girls' hearts everywhere. Zack, too, admires her feisty attitude and strength; she's different from the other girls around:

Something about Chloe got to me, like an itch I couldn’t scratch. She was under my skin, in my head. I liked how she was optimistic, happy, and a hell of a lot of trouble, but special in a strange way. (...) She was captivating in a way that no one else could manage. Then there was another side of Chloe. Witty and tough. I got in her face, and she’d go toe to toe with me. She never backed down.

And that's when things get complicated and maybe too serious, because there's this charge, this attraction between them they can't ignore - but they can't really act on it either. Beside their insecurities, fear of getting hurt and all the other stuff each of them has going on, there' s the little matter they are practically siblings now and it would be awkward and inappropriate to have a romantic relationship.

He was my own shirtless, superhero, baseball player who rescued me from stinky boys on dirt bikes—time to lay off the romantic movies.

She left me unsettled. My world was somehow off its axis and righting itself at the same instant. Which was why I’d steered clear of her, trying to make it look like I didn’t want anything to do with her.


***
The sweet, cute love story between Chloe and Zack is the main focus, but the book also deals with family issues, bullying, college life, mean games, treason and friendship. It's a very well balanced book and there are some meaningful messages behind it. I'll admit though that sometimes, the characters' actions seemed to be a little too immature and shallow for some college students and they acted more like spoiled high school kids, but those instances where few and far between and didn't really affect the story.
All in all, The Unofficial Zack Warren Fan Club was a quick, fun, cute read with an original plot and two awesome, witty, easy to relate to main characters that I simply adored! Now I'm looking forward to the sequel, which features one of my favorite side characters from this book, Kyle. 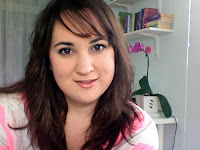 J.C. Isabella is the author of Chasing McCree and The Unofficial Zack Warren Fan Club. Ever since she discovered romance novels in high school, she has been a self proclaimed fan. This led to penning her first YA. When she isn't thinking up new recipes for the cookbook she hopes to one day write, she is brainstorming a new novel and listening to country music. She lives in the tropics of Florida with her big fat Italian family and ornery feline companion.

There's an awesome interview and a giveaway coming up next, so stay tuned! ;) 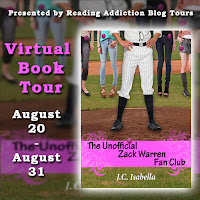 *Disclosure of Material Connection: I am a member of Reading Addiction Blog Tours and a copy of this book was provided to me by the author. Although payment may have been received by Reading Addiction Blog Tours, no payment was received by me in exchange for this review. There was no obligation to write a positive review. All opinions expressed are entirely my own and may not necessarily agree with those of the author, publisher, publicist, or readers of this review. This disclosure is in accordance with the Federal Trade Commision’s 16 CFR, Part 255, Guides Concerning Use of Endorcements and Testimonials in Advertising*