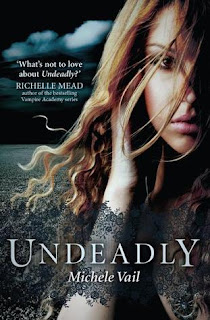 The day I turned 16, my boyfriend-to-be died. I brought him back to life. Then things got a little weird...

Molly Bartolucci wants to blend in, date hottie Rick and keep her zombie-raising abilities on the down-low. Then the god Anubis chooses her to become a reaper—and she accidentally undoes the work of another reaper, Rath. Within days, she's shipped off to the Nekyia Academy, an elite boarding school that trains the best necromancers in the world. And her personal reaping tutor? Rath.

Life at Nekyia has its plusses. Molly has her own personal ghoul, for one. Rick follows her there out of the blue, for another...except, there's something a little off about him. When students at the academy start to die and Rath disappears, Molly starts to wonder if anything is as it seems. Only one thing is certain—-Molly's got an undeadly knack for finding trouble....

Undeadly was a quick, fun and very refreshing read. One that I really needed, after all the intense, emotional, angst-y books I've read lately. The heroine has a young, spunky attitude and a joyful voice that made reading this book a very entertaining experience. Yes, she deals with zombies, reapers, necromancers and death, but her feisty spirit and sarcastic lines make everything flow by at a fast pace and puts a smile on your face.

I haven't read that many zombie books before (I did ready many reaper books, as you know), but the way the author approached this subject and the mythology was very unique and interesting. The story about souls, reapers, necromancers, about how they were made and the powers they had was fascinating.

Molly had a normal life - well, as normal as it could be, in a world where everyone knew about the existence of the supernatural beings living (or not quite) among them and did their best to adapt.

Being a necro doesn’t make anyone really special, though. Everyone has to learn about necromancy, about zombies and SEER machines, and even Ancient Egyptian history (required course, like math and science). But it’s not exactly a big deal these days, not like it was waaaaay back.


She had the usual necromancer-in-training, family and and high school drama to deal with. And then her 16th birthday came along and everything changed. Suddenly, she had much more on her plate than she could take: family secrets revealed, new powers, prophecies, a maybe-boyfriend turned dead - and then brought back to life - who acted weird, a kind-of-dead, hot stalker, a new school to attend.... And more, but you'll have to read the book for yourself to find out about it. :) Scary, but exciting stuff all around!

This reaper stuff was like opening a beautifully wrapped present on my sixteenth birthday and getting a box full of scorpions.


The first part of the book seemed a bit slow and confusing, but when Molly moved to the necromancer boarding school, things started to get more interesting and captivating! She could barely catch her breath - there was always something going on and she was always caught in the middle. And because she was new at everything, she was kind of clueless and overwhelmed. Even so, she had an impressive way of getting through it all. She's fun, feisty and resourceful and got a few reliable allies on the way. Of course, they couldn't solve her problems for her, but they proved to be very helpful when she needed them the most. And despite everything, she never backed down or hide or whine, not even in the most dire situations, which made it even easier to like her and to cheer her on. It was awesome to follow her on her adventures!


And like all that was not enough, she also had to deal with the usual teenager problems: family drama, mean girls, cute boys, being the new girl in school... Speaking of which, there's not that much of romance in the book. But there's potential. ;) I really liked Rath (I mean, hot reaper, bad boy attitude and mysterious appearances? Totally my kind of hero!) and I hope to see more of him in the next books. Molly's new friends were awesome as well and I could see a great bond forming between all of them already. And I'm pretty sure that will come in handy for Molly's next stories - she seems to be in for a big adventure!

All in all, Undeadly was a very enjoyable and interesting book. It was fun, fast-paced and the writing felt natural and flew smoothly. I'll admit thought that it took me a while to get into the story, to understand all the mythology and to get used to Molly's voice. She's very young, full of energy and sometimes immature, and adding to that her necro abilities, it took some time to connect with her and to adapt to the world building. But there's a lot of potential for growth and development for her and the mythology elements are fascinating, so I really recommend this to Young Adult Paranormal lovers who are looking for something fresh and original!

*Review copy provided by the blog tour host and the publisher Harlequin Teen via NetGalley in exchange for my honest opinion. Thank you!

And I have a huge giveaway and the playlist for the book coming up next. Stay tuned!;)