Quick Note on the YA Crush Tourney (Pt. 3): #TeamJLAFTW! 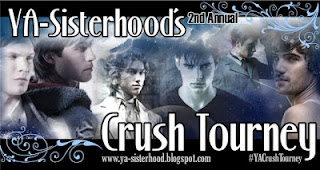 It's that time again. Time to vote for one of the most swoon worthy characters out there! Time for Jennifer L. Armentrout's characters to rock the YA Crush Tourney hosted by The YA Sisterhood. I already warned you about today's match, when Aiden (The Covenant) fights against Dimitri (Vampire Academy). It's a tough one, I know, but it's time for someone else to shine and Aiden is perfect for the job. Actually, he's perfect, period. 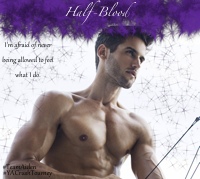 If Kayleigh's (Aiden's advocate in the #YACrushTourney) post wasn't enough for you all (did you catch the "intense storm colored eyes that turn to shades of silver when he feels strong emotions" part? Or that he can control the element Fire and he's super fierce and protective??"), then how about a few extras? Let me give you a few convincing quotes (I'll do my best to be brief, but I'm not making any promises here):

Aiden stepped forward, his eyes were so bright and so warm. I wanted to forget about everything and fall into those eyes. Carefully, he reached out and with those fingers, he tucked back the strand of hair that always ended up in my face. I shivered, unable to help it. “There is nothing wrong with hope, Alex.” (Half-Blood, pg. 293) (so supportive!) *melts*

Aiden gave me one of his rare smiles. Every cell in my body warmed. I even forgot about the terrible thing I was training for. His smile had that kind of impact. (Half-Blood, pg. 299)

[...]his arms circled my shoulders. Slowly, carefully, I rested my head against his chest. My hands fell to the curve of his back and I inhaled deeply. His scent, a mixture of the sea and soap, filed me. The steady beat of his heart under my cheek warmed and comforted me. It was just a hug, but gods, it meant so much. It meant everything. [...] “You don’t have anything to worry about, Alex. I’m not going to let anything happen to you.” *sigh* He's  so caring and protective! (Half-Blood, pg. 339)

He moved, ever so slightly, and his lips brushed across mine once, and then twice. It was such a soft, beautiful kiss, but when the kiss deepened, it wasn’t a shy one. This was one of dangerously pent-up need, a desire that’d been denied far too long. The kiss felt fierce, demanding, and soul burning....[...] Every place our bodies touched, sparks flew. Aiden puled his lips away from mine, and I made a sound of protest, but then his mouth trailed across my throat and to the base of my neck. My skin burned and my thoughts were on fire. His name was barely a whisper, but I felt his lips curve against my skin... (Half-Blood, pg. 341)

*gets distracted by this particular scene for a while*
*clears throat* Where was I? Oh. Right. And I'm still at the first book here. The second one (Pure), is much more exciting and intense and heartbreaking and powerful and, well, spoilery, but I'll give you the highlights:

“You’re incredibly intelligent, Alex. Funny and…” “Pretty?” I supplied, only half-serious. “No, not pretty.” “Cute?” “No.” I frowned. “Well, then.” Aiden’s laugh sent shivers through me. “I was going to say ‘stunning.’ You’re stunningly beautiful.” (Kindle edition, pg 115 )

“Ever since I’ve met you, I’ve wanted to break every rule.” Aiden turned away, the muscles in his neck tensing. He sighed. “You’ll become the center of someone’s world one day. And he’ll be the luckiest son of a bitch on this earth.” (pg. 122)

Umm.... Remember how I didn't promise I'd be brief? Anyway, here's something from Aiden's POV. :D

My hands tightened on her shoulders. And a part of me— all of me—wanted to take her away, from all of this. Without really thinking, I pulled her against me and tried to come up with something to prove to her that she was going to be okay. But then she placed her head against my chest and I stopped breathing. (Half-Blood, Chapter 16, YA Heroine Tourney incentive)

"You don’t have anything to worry about, Alex. I’m not going to let anything happen to you.” The moments those words left my mouth, I knew I’d crossed some invisible line that I could never, ever go back from. They weren’t just words. They were an oath that I’d keep true to the end of my days. (Half-Blood, Chapter 16, YA Heroine Tourney incentive)

The quick inhale drew my attention, and I looked at her. She was so godsdamn beautiful, it hurt to look at her sometimes, and she didn’t even have a clue. Muscles in my stomach tightened. That pressure increased. I sucked in a deep breath of air and it went nowhere. (Pure, car/zoo scene, YA Crush Tourney incentive)

Clasping her cheeks, my mouth found hers as her hands settled against my chest. My heart was beating like I was a sixteen-year-old kissing a girl for the first time. Ridiculous, but she had that kind of effect on me. Always had. The kiss wasn’t gentle or soft. There wasn’t a questioning nature to it. I took her into me, because I wanted her. Wanted her more than I’d ever wanted anything in my life, and gods, there were so many things that I wanted, but she took the top spot and she stayed there.  (Pure, car/zoo scene, YA Crush Tourney incentive)

Ok, I'll stop now. But do you see what I mean when I say Dimitri, who?:))
*Thanks Jennifer L. Armentrout for the quotes and incentives and thanks Christina (Bibliophile Mystery) for helping me with picking the quotes.;)


And because we're all about #TeamJLA today, we have to support Daemon from the Lux series as well. He's against Peeta (The Hunger Games), but Val (Stuck In Books) does a great job at telling you why you should vote for Daemon (but, c' mon, who doesn't love Daemon Black?!) Get the deets on the fansite. (remember that they host a giveaway for a pre-order of Onyx, Lux #2.) 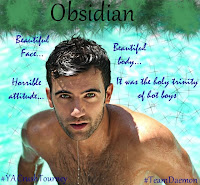 Here are our incentives:

2800 Votes:
A small scene from Deity in Seth's POV

3400 Votes:
A teaser from Onyx, Deity, Cursed, and Unchained.

Daemon's win: a sneak peek at the "Library Scene"

Remember... if Aiden or Daemon make it into the Final Four, you will get to see the uncut Laptop Scene!