I'm so happy to share the beautiful cover of Conjure by Lea Nolan with you all today! Conjure comes out in September at Entangled Publishing - I'm a big fan of their books and gorgeous covers, so I'm very excited about this one! 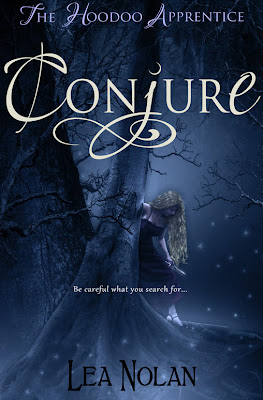 Be careful what you search for... Sixteen-year-old twins Emma and Jack Guthrie hope for a little summer adventure when they find an eighteenth-century message in a bottle revealing a hidden pirate treasure. With their best friend—and Emma's secret crush—Cooper Beaumont, they discover the treasure, and accidentally unleash an ancient Gullah Hoodoo curse that attacks Jack with the wicked flesh-eating Creep and promises to steal Cooper’s soul on his approaching eighteenth birthday. Determined to save the two people she loves the most, Emma apprentices herself to an elderly sea island hoodoo root doctor who agrees to teach her the magic to undo the hex while she works to unravel the riddle of the pirate’s message. With the clock ticking down to Cooper’s birthday and Jack turning into a walking skeleton, Emma must hone her new skills to conjure visions of the past to discover the curse’s origins, steal an antique ruby, battle a horde of terrifying demon dogs, and summon ancient spirits who can help set things right before it’s too late.

Wow! How interesting and original does all that sound? Hoodoo, old curses, ancient spirits, hidden messages, visions of the past, romance... Sounds like quite a fabulous adventure, don't you think?:D
And I really like the cover! (and not only because it matches my blog design - but how cool is that, anyway?) I like that it has this magical, dark, fantastic feeling to it; I like the colors and the effects. Also, I love the fonts (haha, I love the tiny moon used for the j in Conjure)...
Anyway, enough with my opinions already. Tell me what do YOU think. ;)
For a chance to read this early (you know you want to;)), fill in the Rafflecopter form bellow to enter the giveaway: (they're giving away 5!!! digital copies:)
a Rafflecopter giveaway