I have a super fun guest post and a giveaway to share with you today! We all need our fun vampire fix from time to time, don't you think? ;)

But first, some info on the book I'm talking about: 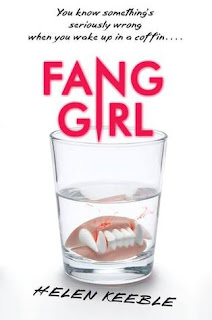 Things That Are Destroying Jane Greene’s Undead Social Life Before It Can Even Begin:

2) Parents who are begging her to turn them into vampires.

3) The pet goldfish she accidentally turns instead.

4) Weird superpowers that let her rip the heads off of every other vampire she meets.(Sounds cool, but it doesn’t win you many friends.)

5) A psychotic vampire creator who’s using her to carry out a plan for world domination.

6) A seriously ripped vampire hunter who either wants to stake her or make out with her. Not sure which.

Get the book: Amazon / B & N / The Book Depository
About the author:

Website / Goodreads / Twitter
Helen Keeble is not, and never has been, a vampire. She has however been a teenager. She grew up partly in America and partly in England, which has left her with an unidentifiable accent and a fondness for peanut butter crackers washed down with a nice cup of tea. She now lives in West Sussex, England, with her husband, daughter, two cats, and a variable number of fish. To the best of her knowledge, none of the fish are undead.

Her first novel, a YA vampire comedy called FANG GIRL, is out 11th Sept 2012, from HarperTeen.

She also has another YA paranormal comedy novel (provisionally titled NO ANGEL) scheduled for Sept 2013.

Vampires aren't real. If they were, they couldn't stay hidden for long, right? Thanks to the endless books, films, and TV shows filled with vampiric lore, we all know how to recognise a bloodsucker. And we all know their weaknesses - sunlight, beheading, fire, stakes, athletic teenage girls, holy water, garlic…

Or maybe that's just what the vampires want you to think are their weaknesses.

Delve a little deeper into traditional vampiric folklore, and there are a lot of weird things that don't appear in our modern vampire fiction. Things that maybe the vampires want to keep quiet…

Actually, this is true in a lot of paranormal romances too, now that I come to think of it.

Anyway, all you have to do is stick a virgin on a white (or possibly black - sources vary) horse, and they'll be able to lead you straight to the grave of the nearest vampire. And if you use a woman older than 25, she’ll even be able to kill the vampire for you as well. Just get her to whip the vampire's grave with a hazel twig, and the bloodsucker will never be able to rise again.

Basically, older female virgins are homing missiles of mass vampire destruction. No wonder literature is full of vampires desperately trying to romance young girls. They have to neutralize them!

Because, according to our friend Romanian folklore again, vampires always float. They literally can't sink.

Folklore boringly suggests using this trait to determine if someone is a vampire by tossing them in a river, but just think of the many other uses for this peculiar property...

"This is the captain speaking. Unfortunately we have hit an iceberg and water is now pouring through the hull, but there is no need to be alarmed! The vampires strapped under the Titanic's hull make this ship literally unsinkable. While we repair the hole, please enjoy complimentary cocktails on the aft deck, and ignore the muffled screams of the tormented undead underneath your feet."

Vampires would definitely want to keep this one quiet. No bloodsucker wants to spend eternity stuffed under an airplane chair as an emergency floatation device.

3) You're probably always carrying the means to defeat one

Check your pockets or purse. Got some spare change? Maybe a half-eaten packet of breath mints? A tissue?

Congratulations! You can stop a charging vampire in his tracks.

All you have to do is fling a handful of small objects at him, and he'll be compelled to stop in order to count them all. No, really. The technical term for this behaviour is arithmomania, and it crops up everywhere in vampire folklore, all around the globe. Poland, Romania, China, India, pretty much everywhere has legends about obsessive-compulsive vampires. Though curiously, it seems to have fallen out of favour in modern vampire fiction.

Apart, of course, from one famous case: 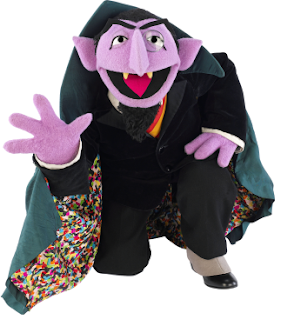 There you go. Incontrovertible proof that Sesame Street is written by vampire hunters, who are determined to make sure children everywhere know vampires' real weakness.

And now you do too.

P.S. Yes, I really do use one of these pieces of vampire folklore in my novel FANG GIRL. And no, I'm not going to tell you which one…
***
LOL! Awesome, right?:P
And now the giveaway...
Open internationally, and the last day to enter is December 25th.

The prize pack includes:
- one signed copy of Fang Girl (can be personalised)
- a voucher for an ARC of Helen's next book NO ANGEL as soon as they are available (likely to be Spring/Summer 2013)
- a cheerful vampire goldfish paperclip
- Fang Girl stickers featuring the cover and quotes from the book
a Rafflecopter giveaway
Event hosted by: