Review: Death and the Girl Next Door by Darynda Jones 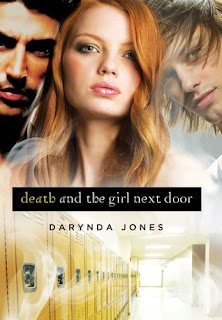 Death and the Girl Next Door (Darklight #1)
by Darynda Jones

Darynda Jones, author of The New York Times bestselling series that began with First Grave on the Right, brings us Death and the Girl Next Door, a thrilling Young Adult novel garnering high praise and early buzz from major authors.

Ten years ago, Lorelei's parents disappeared without a trace. Raised by her grandparents and leaning on the support of her best friends, Lorelei is finally beginning to accept the fact that her parents are never coming home. For Lorelei, life goes on.

High school is not quite as painful as she thinks it will be, and things are as normal as they can be. Until the day the school's designated loner, Cameron Lusk, begins to stalk her, turning up where she least expects it, standing outside her house in the dark, night after night. Things get even more complicated when a new guy—terrifying, tough, sexy Jared Kovach—comes to school. Cameron and Jared instantly despise each other and Lorelei seems to be the reason for their animosity. What does Jared know about her parents? Why does Cameron tell Jared he can't have Lorelei? And what will any of them do when Death comes knocking for real? Thrilling, sassy, sexy, and inventive, Darynda Jones's first foray into the world of teens will leave readers eager for the next installment.


It's no secret that I'm a big fan of Darynda Jones' adult series, Charley Davidson. I loved, loved, LOVED First Grave on the Right  (it was one of my favorite reads last year, I gave it 6 stars and all!) and I adore Darynda's writing style, so that series earned a good place on my all-time-favorites shelf and Darynda became an auto-buy author. So of course I was super excited about Death and the Girl Next Door. To say that I had high expectations for it would be an understatement. So I really, really wanted to like it - and I did like it, but... not as much as I wanted to. It was a fun, quick read, but it wasn't what I expected - at all. *sigh*

We have the trademark snark and humor, the awesome writing, the mystery, the heroine who gets herself intro trouble trying to solve said mystery, the great and often hilarious supporting characters, the hot supernatural love interest, an interesting and quite intriguing main idea... But that's pretty much all about it that's original and that resembles Darynda Jones' style. Other than that, it's just the usual fluffy Paranormal Romance: the main character is a normal high school girl, weird things happen to her, but she doesn't understand why, then the bad boy - super sexy, super powerful, super mysterious etc - shows up, girl is instantly drawn to him, even weirder, supernatural, inexplicable things begin to happen, girl finds out she's not quite a normal human being and she has a more important role in life, there's some action, some paranormal twists, some surprising (or not) revelations, some teenage angst, some mystery-boy-saves-girl's-life situations, some sweet and hot scenes.... Ok, I know there's more than that to the story, but... That's, in a nutshell, how it felt and what didn't really work for me. It was all too familiar.

Lorelei is a feisty, like-able character, but sometimes she doesn't make the smartest decisions. She has the best lines and the most awesome friends - I liked their banter, but also their loyalty and support. Their connection and familiarity - even in the most dire, dangerous situations - were fun and heartwarming. Everyone should have friends like them! And when the two (yes, two!) mysterious boys come into the picture, things get even more interesting and hilarious! There's something dreamy and supernatural about both of them, but apparently each one of them has his own agenda, cue lots of fighting, banter and snarky dialogues between them. So yes, they were fun, sexy and they brought and edgy feeling to the story, but, to be honest, I didn't really feel for them. I don't know, it just felt like something was missing in the whole picture. There was the hot, instant connection between Lor and one of the boys, but to me, it was a bit too much (maybe a bit too shallow?) We know that in this kind of situations, when everyone is wary of the main male character and he has a dark side, there's something more to him that our heroine can see/feel and that's why she's instantly drawn to him (normally). But Lorelei just gushed about how gorgeous he was and how he made her weak in the knees. (and spoiler - Ok, yes, he saved her life, but only because he almost got her killed in the first place!)

Without another thought, without the slightest hesitation, I turned and ran into his arms.

My soul took flight! My heart soared! A euphoric, deliriously giddy sensation washed over me with the knowledge that Jared was following me because he wanted to.

Sometimes, she is too immature and oblivious for her own good. I mean, I get that stalker boys are The Bomb in YA lit nowadays, but THAT was a bit extreme. I can't say more on the matter because it's spoiler-y, but... NO. I was not impressed - or amused, for that matter.

He, at least, seems to have better reasons:

“Why me?” Did he have any idea how gorgeous he was? His lips thinned in frustration like I should already know the answer. He inched closer until his knee touched mine, his eyes, curious and intense, boring into me. “Because you move like fire rushing across a floor,” he said, his voice hushed, velvety smooth, “like flames licking up a wall.” The rest of the world crumbled away as he lifted my chin. “Your energy is liquid and hot. Even from a distance you burn, you scorch anyone who gets too close. You are wine on my tongue and honey in my veins, and I cannot get enough of you.” He leaned forward and whispered into my ear. His warm breath sent shivers cascading over my body. “You intoxicate me, Lorelei McAlister. You will be my downfall.”


I'll admit that the sexy scenes were quite nice and steamy - even at a YA level:

He pulled me tighter and walked me back a wall, pushed me against it and pressed into me. His body, solid and strong, felt like molten steel against mine. His lungs labored as he explored my mouth with his tongue. I savored his taste, sweet like candy.

Now, about the plot - the main idea was pretty awesome. And I liked that the last part of the book was full of twists and all sorts of unexpected revelations and events. It was a great build up to more badassery to come in the following books. Still - there were ups and downs - and the ups were pretty high, but the moments leading to those were dragging.

*sigh* Maybe I just missed something and I'm really sorry about that. And I'm sorry if I was mean and that this review is all over the place, but that's how this book felt for me too. It wasn't bad, it had plenty of good moments, but it just wasn't for me.

I may or may not read the sequel when it comes out. But for now, I'll just stick with the Charley Davidson series. *pets books* And I know that it's wrong to compare the two series, but it feels like Lorelei still has a lot to learn (from Charley :P) and to grow as a character, and Jared... well, not only he's not on the same page, he's not even in the same book with Reyes, as far as I'm concerned.

Anyway, you don't have to take my word for it, this is just my opinion. I guess I'm burned out on YA Paranormal Romance, I read it at a bad time or something. So here's some reviews from fellow bloggers who loved it, they make really good points: